Menu
Learning Targets: - Locating and using the timeline
- Moving the ball and setting Keys
- Independently repeating and modifying movements
- Create a play blast video
- Evaluate the speed, direction and flow of ball as it moves 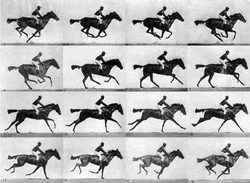 Mathematically records a specific value in space as well as a specific point in time.
Describe and control the essential movements of a shot

The number of frames in a movement that defines the time a movement takes.
TIMING: Changing the # of frames between keys = changing the speed of movement
3. Need it to finish back at the start?  Middle click on frame 1 (where you started) drag it to the end of your time line, or where you want it to finish, hit 'S' and you should have made a loop.

A great way to save time and duplicate a movement, is to copy and paste a selection of key frames.  Remember you can increase your shot length at any time.

The brain converts a still image into a moving image when 24 frames a second are played and this is what most films are shot in as well as other moving picture projects.

You should never judge the sped of your movement by how in plays in Maya, it's really not accurate.  You need to create PLAY BLASTS.  It's not a render, but a screen capture of what's going on inside your file.
Learning Target: - Use Graph Editor to add a roll to the ball
- Change the speed of the movement
- Analyze the result and make change or adjustment where necessary

You've made the ball move, now you're going to make it roll!!

You can focus on the main area the same way as the main interface, by pressing HOT KEY 'f'.  In fact try using all your control key to navigate the graph editor the same way as you would normally.
Making part of the animation faster
As an example we're going to making the first part of the animation faster by 8 frames. And the last part slower
Final Point to make with moving in Graph Editor
You can move an entire movement within the virtual space if you need.

Learning Target: - Apply Slow-ins and Slow-Outs to your balls movement
- Analyze the correct amount that should be applied
SPACING: (slow in's and slow out's)
The way an animator chooses to transition between two keys
In-betweens = Successive frames of animation created between keys
TIMING: the number of FRAMES between keys
TRANSITION: The WAY an animator chooses to move between two key
Watch from 23:30 to 27:00
Here you have a ball rolling very mechanically. See how in the graph editor.  The translation Z graph is very straight.  The speed is constant giving a mechanical/unnatural feel.  The blue lines represent where the ball is at each frame.  Notice how they're spaced equally. There's no slow in or slow outs.

In most cases you'll want your rolling ball to look natural or organic. You can change this by modifying tangent types of the curve.  This button in the plateau tangents.

TANGENT TYPES: Define how you define and edit in-betweens in the graph editor.
In changing this your graph will become curved and you'll have a slow in's and out's.  The green marks demonstrate the frame times.  Notice how they are closer together at the beginning and the end. 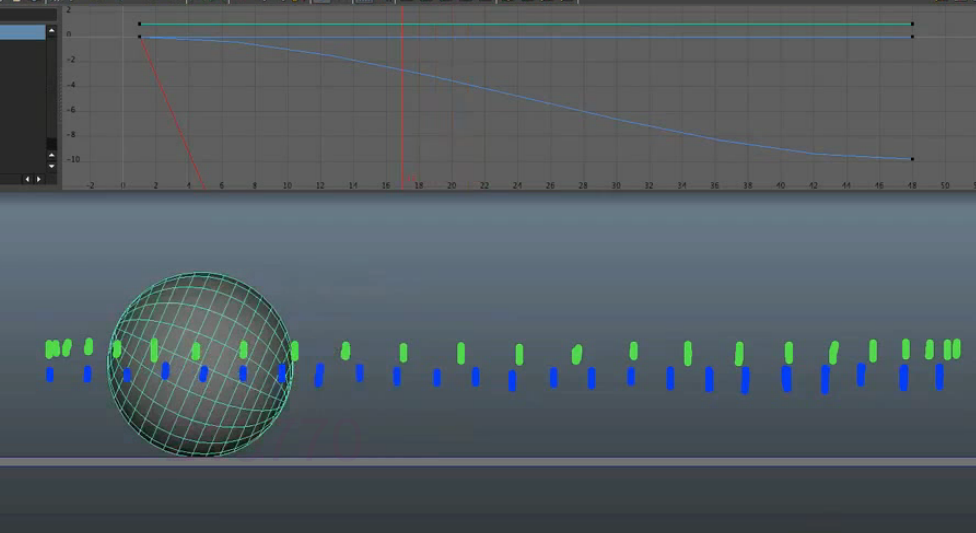 ANIMATION EXERCISE: The goal this week is to get comfortable setting and editing keys by rolling a sphere primitive in a single axis.

EXERCISE: Create a sphere primitive and have it roll in one axis across the ground plane, around in a square shape. Get comfortable setting and editing keys!

• One character: Create a sphere primitive.
• Orthographic view: animate in a side orthographic view only (keep it simple!).
• Schedule: Uploaded one day prior to your next session.
• Submit both the Maya file and movie file: 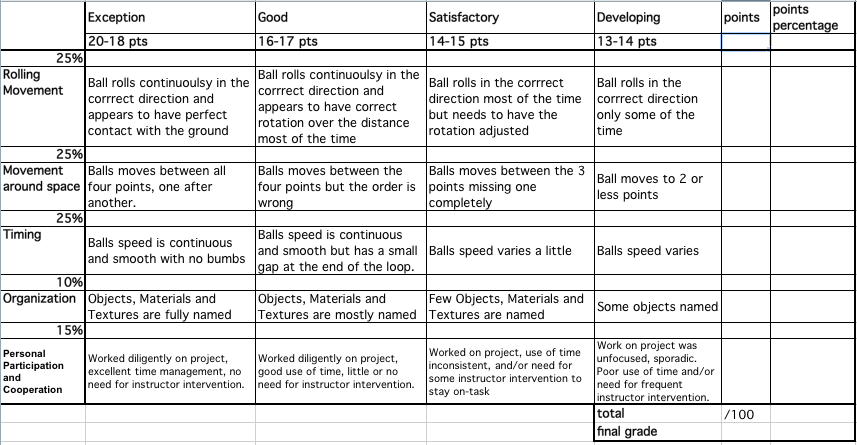